EPIC spends much of its time planning for serious disease emergencies, making sure that Scotland is ready in case of outbreaks of diseases such as Foot and Mouth Disease or Avian Influenza. But EPIC scientists cannot work on all diseases at once, so how do we decide what disease to prioritise?

We need to know what diseases are most likely to come over Scotland’s borders, where these diseases may originate and through advice to Scottish Government, what action can be taken to best prepare, prevent or control diseases to protect Scottish livestock.

Working closely with colleagues at Defra, EPIC scientists assess which diseases are most likely to spread into Scotland and the potential impact they might have on the Scottish livestock industries. Whilst avian influenza and foot and mouth disease are high up the list, EPIC considers a whole range of other diseases, and monitors the situation for any new disease threats that might be appearing for the first time.

EPIC scientists use information on: 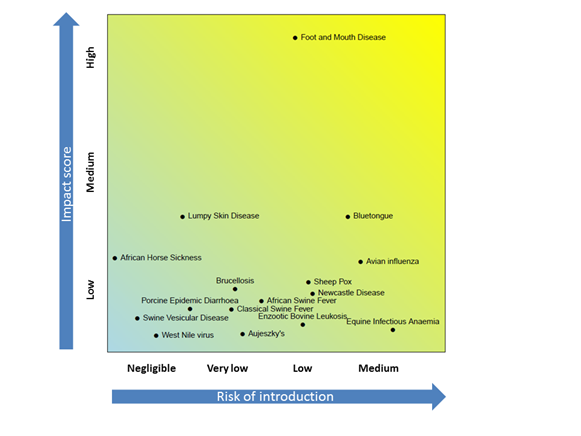 This graph shows our predictions of the chance that certain diseases will arrive in Scotland and how great the impact could be on the Scottish livestock industries. Diseases towards the top right corner are those of most concern.

Unsurprisingly, given the devastation caused by the outbreak of Foot and Mouth Disease in 2001, you can see that our models predict that foot and mouth disease would have a very high impact. The key features that lead to this high impact are that it can infect cattle, sheep and pigs, and its ability for rapid spread, as well as its devastating impacts on trade and society as a whole. However, the risk of an incursion of Foot and Mouth Disease is currently classed as low. It is not present at the moment (Oct 2019) in any countries within Europe, our most common trade partners, but is present in several countries in North Africa. It is also a disease that can be introduced through a number of routes so, the numbers add up to Foot and Mouth Disease being one of our most important threats, and the disease remains high on EPIC’s radar.

In contrast, the chances of seeing Avian Influenza arriving in Scotland are much higher. Indeed there were three cases in poultry units in England during 2015-2016. Although some strains of Avian Influenza can cause serious disease in humans, the forms found so far in England don’t commonly infect people. However, the disease has the potential for substantial impact on the poultry sector.

An example of a disease that has recently moved up the list of concern is Bluetongue Virus. Cases of Bluetongue have been occurring in central France since September 2015 for the first time in several years, which means the risk of introduction of the disease to Great Britain has increased. The high predicted impact of Bluetongue reflects its ability to infect both cattle and sheep, its potentially high rate of spread and its impact on exports.

This system isn’t perfect, it only provides general estimates of risk and impact, but its ability to flag up concerns or changes in risk levels can help Scotland to be prepared. In turn it helps to keep Scottish Government informed and up to date on upcoming disease risks, considering influences pertinent to Scotland’s situation.

Alien Pathogens on the Horizon: Opportunities for Predicting their Threat to Wildlife

In the front-line of global disease