BTV-8 and BTV-4 are present in France, with ten new cases of BTV-8 reported between October and December 2018. No new cases of either strain have been reported in France in 2019, but cases of BTV-8 have been reported in Germany and Belgium. Currently, APHA considers the risk to the UK to be low. EPIC scientists are working with APHA to investigate the potential for BTV spread in Scotland.

BTV-8 is present in France and disease has been identified in the Seine Maritime département at a location within 150km of the UK mainland. Potentially this infected premises brings the coast of Sussex and Kent within a restricted zone. The UK will apply for a derogation from Article 8 of the Directive (2000/75/EEC) such that no zone will be necessary. BTV-4 was identified in mainland France in early 2017 the likely source of disease is presumed to be imported animals from Corsica. A BTV-4 / BTV-8 restriction zone has been put in place across the whole of mainland France. APHA will continue to monitor climatic conditions which influence vector spread. The UK has published a disease control strategy for Bluetongue focusing on industry-led voluntary vaccination.

In October 2017 Bluetongue virus was detected in a batch of 10 cattle imported into Scotland from the same assembly centre in France – an area where multiple cases of Bluetongue have been confirmed in recent times. The disease was detected as part of routine post import testing. The incident highlights the importance of careful sourcing of stock and awareness of areas where exotic disease outbreaks are occurring.

In September 2018 Bluetongue virus (BTV-8) was detected in 2 cattle imported into North Yorkshire, England from the same assembly centre in central France following the routine post import testing regime. In October 2018 Bluetongue virus was identified in 4 sheep during routine post-import testing when the sheep were brought to Lancashire from France.

The dynamics of the disease are driven by host, climate and landscape factors. Climate plays an important role in the spread of BTV. Both vector activity and virus replication are dependent on temperature.  This results in strong seasonal patterns of disease, peaking in summer when vectors are most active. Conditions allowing overwintering of infected vectors can result in a reoccurance of epizootic disease, as seen in France 2015/2016. Scotland is on the margins of climatic suitability, with typical winter temperatures in Scotland interrupting the cycle of transmission. The abundances of particular Culicoides species in Scotland vary widely in location even between farms separated only by a few miles. APHA actively monitor the arrival of arboviral vector species new to the UK assessing if they are maintaining active colonisation. Since the 1990’s BTV outbreaks have occurred at increasingly northern latitudes, spreading from previously endemic areas of northern Africa into southern Europe. Spread of the disease through midge vectors can occur over distances of more than 200km driven by winds (especially over water), therefore wind direction and strength are key aspects in considering the risk of incursion.

BTV is a notifiable disease. The disease mortality varies in sheep dependent on strain, but can be up to 70%. The clinical signs in sheep vary in severity, but can include:

Although bluetongue usually causes no apparent illness in cattle or goats, cattle may display clinical signs including:

As with all notifiable diseases, suspicion of infection in livestock must be reported to Animal & Plant Health Agency (APHA).

BTV re-emerged in France in October 2015. Since then the disease has spread across most of mainland France including regions directly across the English Channel from Kent and Sussex. Genetic analysis shows the current outbreak to be closely related to BTV-8 samples taken in Northern Europe during 2006-2008, suggesting the disease may have been circulating undetected at low levels in the intervening years. France had been declared BTV free in 2012 following a mandatory vaccination programme 2008-2010. Since January 2017, 650 new BTV-8 positive animals have been identified in France (as at 25th May 2017). Only 4 (out of 96) departments all located in North West France remain free of BTV (Finistère, Calvados, Orne and Eure). Most cases have been identified in the centre of the country through surveillance, as clinical signs are being observed rarely. The serological surveillance programme involves 180 sentinel cattle (aged 12-48 months) from 9 or more farms in each department.

Risk of BTV incursion into the UK:

In recent summers there have been outbreaks of BTV in Western Europe and the virus reached England in 2007/8. APHA assesses the current risk of BTV incursion into UK as LOW. This reflects the cold weather which means midges are not yet active, predominant wind direction and low likelihood of virus circulation in local midge population in the UK (as at 25th May 2017).

The last reported cases of BTV in Great Britain were in 2007 and a single imported animal in 2008. In 2009 Scotland introduced a compulsory vaccination programme against BTV-8. The 2009 vaccination campaign was supported by an additional industry-led voluntary curb on imports of livestock from high-risk areas, to further protect Scotland against disease incursion. The consignment of 10 imported BTV-8 positive cattle in October 2017 from France are the only BTV to cases to have be found in Scotland.

The climate in Scotland places it on the limit of potential BTV spread. This presents difficulties for decision makers in Scotland when confronted with a potential BTV outbreak. Analyses by EPIC have demonstrated that under circumstances that are unusual but not impossible (temperatures around 1°C warmer than average and a virus strain such as BTV-8 that is well adapted to spread at low temperatures), Scotland may be at risk of a Bluetongue outbreak. A large epidemic could infect up to 300,000 sheep.

The maps of Scotland below (fig.1) show the distribution of cattle (a) and sheep ( b), alongside the potential for BTV spread in an average year (c), compared to ‘worst case scenario’ involving warmer than average temperatures, an incursion in the middle of the vector season and a virus strain that can spread easily (d).
Incursion locations (fig.1c&d shown by black points) were chosen to represent the different potential routes of introduction into Scotland: 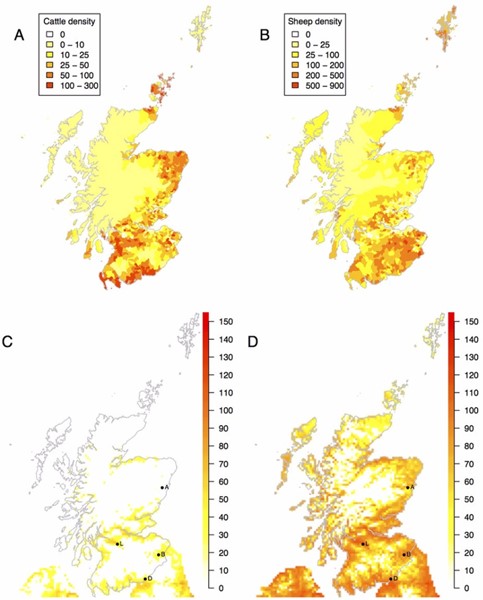 Vaccines are available for BTV. Counter-intuitively, vaccinating cattle may have a substantial benefit in reducing disease in sheep, since Culicoides feed more frequently on cattle than sheep. Potential BTV vaccination strategies have been assessed by EPIC scientists. The effectiveness of vaccination strategies is dependent on location of BTV incursion. BTV-8 vaccine has been available since mid-July 2016 for voluntary use. The decision to vaccinate should be taken by the farmer, in conjunction with their private veterinary surgeon.