African Swine Fever (ASF) is an important notifiable viral disease of domestic and wild pigs. ASF is often fatal, with infected animals presenting similar clinical signs to Classical Swine Fever (CSF) despite being caused by different viruses. In contrast to CSF, there is no vaccine currently available against ASF virus.

The UK has never had an outbreak of ASF. On 12th September 2018 Belgium confirmed two cases of ASF in Wild Boar which represented a jump of c.800Km from the nearest cases in Eastern Europe. Given the distance between other confirmed cases of ASF in wild boar, it is most likely that infection has been introduced by movement of fomites or infected meat products from ASF-infected areas, in other words, human mediated (Defra Preliminary outbreak assessment, 14th September 2018).

In recent years, the virus has been spreading into Eastern Europe and the EU, with cases reported in both domestic pig and wild boar populations in Ukraine, Belarus, Poland and the Baltic States. [APHA Updated Outbreak Assessment #7 ASF in Eastern Europe and Belgium]. Incursions into new areas are usually associated with contaminated products (e.g. swill feeding, movement of pig products), movements of pigs, contaminated vehicles, and the presence of wild boar. In Eastern Europe, backyard pig farms may be particularly important in onward spread. More than 30 cases have been reported in Bulgaria since July 2019, with the initial two outbreaks in non-commercial farms suspected to have been caused by contaminated vehicles.

On the 3rd of August 2018 ASF was reported in the Liaoning region of North East China, this was the first report of disease in China. Following the initial notification of disease in China cases of ASF have been reported in 32 provinces / regions across the country. The distances between the initially infected farms (many hundreds of kms) and the time between the reports (just four weeks) does suggest that infection has been present for some time and this is unlikely to be due to wild boar [APHA Updated Outbreak Assessment #15 African Swine fever in South East Asia]. The disease can also persist in the environment through infected soft ticks of the Ornithodoros genus (not present in UK). The disease has spread rapidly across parts of south-east Asia with cases reported in Vietnam, Cambodia, Mongolia, Laos and North Korea.

The overall annual risk level of entry of ASF into the UK is considered to be MEDIUM because of the combination of the pathways for introduction. In terms of exposure, the probability is given for the three pig sectors and considering the most likely pathways. Feral pigs and non-assured or small holders are the highest risk and given a “likely” score. The spread into the commercial pig sector will probably depend on how long disease has been present but undetected in the country, and would be substantial. Risk management would therefore be recommended.

A large body of work is being carried out in EPIC, in collaboration with the Strategic Research Programme of the Scottish Government, to assess the potential impact of swine fever (ASF or CSF) incursions on the British pig industry. Particularly, this programme aims to help the Scottish Government to (1) better understand the structure of the pig industry in Scotland and GB, and (2) develop more robust surveillance and control plans against swine fevers. Work conducted by EPIC scientists includes:

EPIC scientists regularly meet with pig industry representatives and experts to discuss their work. Through these meetings EPIC scientists keep stakeholders up to date with the latest research and receive feedback on their work, helping to ensure it remains relevant and accurate in reflecting the situation in Scotland. 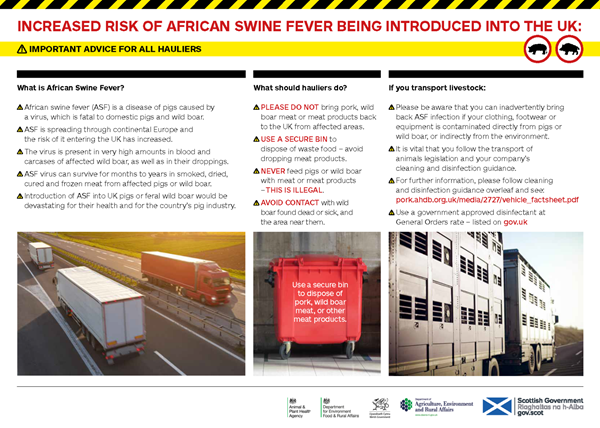 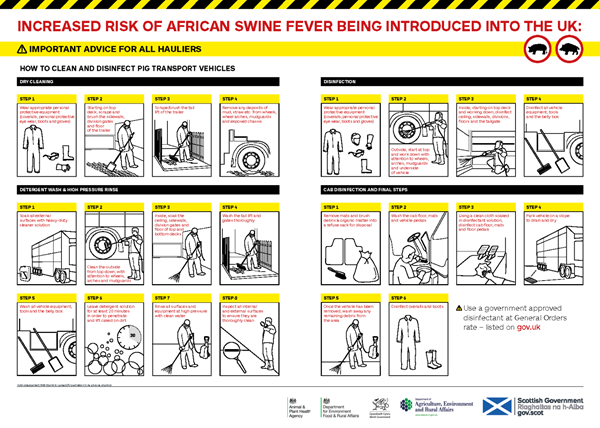