A collaboration between EPIC and the Scottish Government's strategic research programme has resulted in an analysis method that can distinguish between farms with high levels of circulating antibody, as might occur if a persistently infected animal had been missed, to those with lower levels, as might occur from infection coming from a neighbouring farm. EPIC scientists can identify farms where eradication has been effective, and those where there has been reintroduction of infection.

In collaboration with stakeholders (Biobest laboratories, SAC consulting), EPIC scientists are analysing BVD virus from animal samples to inform the latter stages of the Scottish eradication campaign. Thousands of samples have been archived and genotyped, creating an important national reference database for Scotland. As of April 2016, there were over 3,000 samples in the Biobank. Most samples were from holdings in Scotland with about 25% from other parts of the UK. 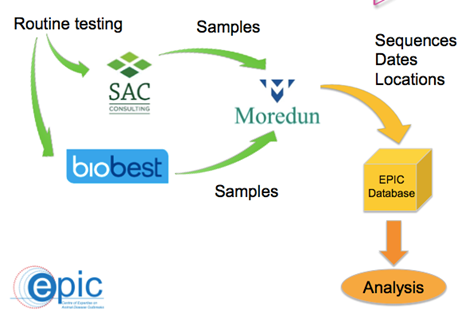