BVD is an economically important disease of cattle. In 2010 the industry initiated a voluntary screening programme. In June 2015 the now mandatory scheme entered phase 4 with a tightening of the movement restrictions of cattle from 'not negative' herds.

EPIC is developing a number of mathematical models to assist in the completion of the 'end game' of Scotland's BVD eradication programme. When an eradication programme comes close to reaching its goal the last few breakdowns can prove difficult to reduce to zero. The creation of a BVD Biobank for Scotland will provide a genetic library to identify the lineage of a breakdown. Disease spread models are being developed which operate using limited data such as that available at the end of an outbreak and 'infer' results. 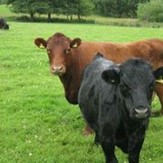 Individual animal-level reporting of cattle movements between agricultural holdings is in place in Scotland, and the resulting detailed movement data are used to inform epidemiological models and intervention. However, recent years have seen a rapid increase in the use of registered links (CTS Links) that allow Scottish farmers to move cattle between linked holdings without reporting.

By analysing these registered trade links as a number of different networks, EPIC researchers found that the geographical reach of these registered links has increased over time, with many holdings linked indirectly to a large number of holdings, some potentially geographically distant. This increase was not linked to decreases in recorded movements at the holding level. When combining registered links with reported movements, it was found that registered links increase the size of a possible outward chain of infection from a Scottish holding. The impact on the maximum size is considerably greater than the impact on the mean.

The research outlines the magnitude and geographic extent of that increase, and show that this growth both has the potential to substantially increase the size of epidemics driven by livestock movements, and undermines the extensive, invaluable recording within the cattle tracing system in Scotland and, by extension, the rest of Great Britain.

This work was developed as a co-production between EPIC scientists and Scottish Government Animal Health and Welfare Division. Scotland's Chief Veterinary Officer Sheila Voas announced in October 2016 the replacement of CTS linked holdings with ScotMoves (from 1st January 2017), citing the work of EPIC in helping provide an evidence based change in policy.

It is important to bear in mind that the new ScotMoves system does not place any additional requirements on keepers. It is simply a new way to record the same information that they previously recorded in their on-farm holding register.

Cattle births, movements and deaths recorded by the British Cattle Movement Service (BCMS) are used in developing disease spread models. Below is a YouTube video of a cattle movement simulator presented at the 2015 Royal Highland Show to show how disease might spread (based on actual BCMS 2014 moves, aggregated to maintain anonymity).

What will the Scottish cattle industry look like in 2040 and how resilient will it be to livestock diseases.

Cows eat grass, don't they? Contrasting sociotechnical imaginaries of the role of grazing in the UK and Irish dairy sectors.