Movements of cattle, sheep and pigs in GB are recorded on central databases. EPIC uses these data to characterise how animals are moved around Scotland and what this means for disease risk.

Data from ScotEID and other sources have been used to characterise pig movement patterns. Analyses examined distances moved, connections between different types of farms, markets and slaughterhouses.

EPIC has worked in collaboration with industry partners including Quality Meat Scotland, the Agricultural and Horticultural Development Board - Pork and the Animal and Plant Health Agency to identify and subsequently close important gaps in data recording systems. These analyses have provided a detailed picture of the structure and connections between farms within the Scottish pig industry. These data have also been used in EPIC to simulate the spread of diseases (e.g. Classical Swine Fever, African Swine Fever and Porcine Epidemic Diarrhoea) between farms. 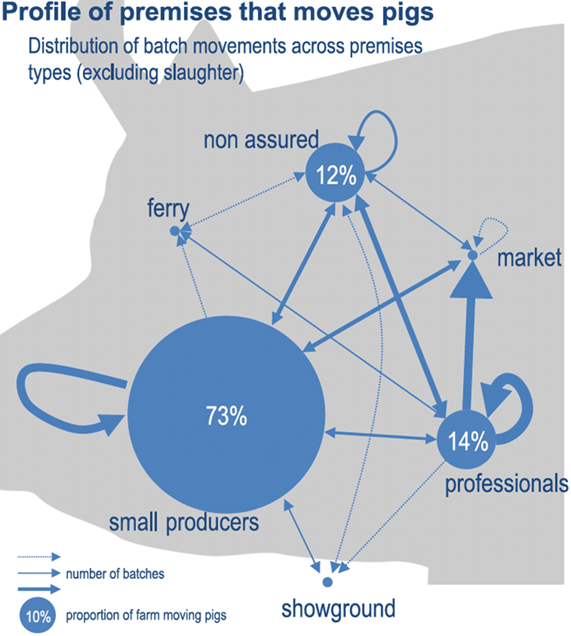 Individual animal-level reporting of cattle movements between agricultural holdings is in place in Scotland, and the resulting detailed movement data are used to inform epidemiological models and intervention. However, recent years have seen a rapid increase in the use of registered links (CTS Links) that allow Scottish farmers to move cattle between linked holdings without reporting.

By analysing these registered trade links as a number of different networks, EPIC researchers found that the geographical reach of these registered links has increased over time, with many holdings linked indirectly to a large number of holdings, some potentially geographically distant. This increase was not linked to decreases in recorded movements at the holding level. When combining registered links with reported movements, it was found that registered links increase the size of a possible outward chain of infection from a Scottish holding. The impact on the maximum size is considerably greater than the impact on the mean.

The research outlines the magnitude and geographic extent of that increase, and show that this growth both has the potential to substantially increase the size of epidemics driven by livestock movements, and undermines the extensive, invaluable recording within the cattle tracing system in Scotland and, by extension, the rest of Great Britain.

This work was developed as a co-production between EPIC scientists and Scottish Government Animal Health and Welfare Division. Scotland's Chief Veterinary Officer Sheila Voas announced in October 2016 the replacement of CTS linked holdings with ScotMoves (from 1st January 2017), citing the work of EPIC in helping provide an evidence based change in policy.

It is important to bear in mind that the new ScotMoves system does not place any additional requirements on keepers. It is simply a new way to record the same information that they previously recorded in their on-farm holding register.

The science of networks