EPIC scientists have used behavioural economics models and social science to analyse the impact of determinants on farmers' behaviour towards animal disease prevention and eradication. These efforts to integrate different disciplines have made a significant contribution to Scottish Government disease control policy.

In research conducted by EPIC's social scientists, farmers expressed negative feelings towards the increasing number of reporting tasks they were facing. The research was based on farmer interviews investigating the adoption of disease control technology, which were conducted with cattle farmers in Orkney and Aberdeen-shire throughout 2013.

Current Demands on Farmers in Scotland to provide cattle data (2014) 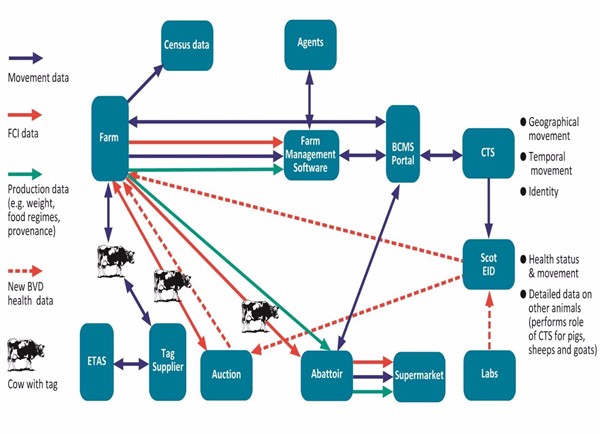 Economic models have been used to predict whether farmers are likely to adopt the P. ovis blood diagnostic test for sheep scab. Using game theory, an economic modelling tool to analyse the outcome of strategic interactions between individuals, expected test prices should result in sufficient uptake by the farming industry to reduce the incidence of sheep scab by approximately 50%.

The demands placed on farmers to manage increasing information flows constitute a significant shift in farmer power from autonomy to compulsion, with farmers held accountable for information, often at the risk of financial penalties for failures to maintain accurate systems.

In 2013, a biosecurity and technology survey (funded by Defra) conducted across England, Wales and Scotland, captured the attitudes of 900 cattle and sheep farmers to various biosecurity behaviours. Aspects of biosecurity investigated included: use of quarantine, double fencing, vermin control and sourcing of stock.

Scotland: more likely to ‘quarantine for least 28 days after bought in and test on arrival’ and ’avoid taking animals to shows’

Cows eat grass, don't they? Contrasting sociotechnical imaginaries of the role of grazing in the UK and Irish dairy sectors.

Tackling wicked environmental problems: The discourse and its influence on praxis in Scotland

What will the Scottish cattle industry look like in 2040 and how resilient will it be to livestock diseases.