The Scottish cattle industry, supported by Scottish Government, embarked upon a Bovine Viral Diarrhoea (BVD) eradication programme in 2010. The impact of this programme has been significant: the majority (90%) of Scottish breeding holdings now have a negative BVD status.

EPIC scientists have been involved in various aspects of the BVD eradication campaign. BVD and other endemic diseases offer unique opportunities to develop cutting edge multidisciplinary tools and methodologies to mitigate risks of disease transmission and subsequently help achieve disease freedom. Equally, there are now new technologies, which EPIC have previously only applied in an exotic disease context, which can usefully inform endemic disease control strategies. For example: EPIC scientists at the Roslin Institute are employing phylodynamic techniques to identify BVD transmission routes and patterns of between farm spread. EPIC scientists at the Moredun Institute have led the creation and curation of a BVD Biobank which has been essential to provide the viral sequence and metadata which necessarily underpin the phylodynamic work. EPIC scientists at the James Hutton Institute are employing novel mixed method approaches (including mobile and video ethnography and semi-structured interviews with cattle keepers) to provide deeper insights into farmers' perception and uptake of biosecurity measures to mitigate BVD transmission. EPIC statisticians at SRUC and BioSS have developed novel methods to look at making better inference from repeated tests on farms.

BVD is an economically important disease of cattle worldwide and causes a wide range of cattle health problems such as abortion, infertility, respiratory and gastro-intestinal disorders. In 2014, it was estimated that eradication of BVD in Scottish beef suckler farms would generate an average saving of around £2,000 per typical herd per annum through avoidable loss in output (Gunn & Stott, 2014). The success of the BVD eradication programme in Scotland is perhaps because it is an industry-driven initiative which is supported by Scottish Government legislation (The Bovine Viral Diarrhoea (Scotland) Order 2013). The programme comprises 5 phases:

Overall, the programme has made a significant impact: the majority (90%) of Scottish breeding holdings now have a negative BVD status.

Disease eradication programmes are notoriously difficult when it comes to the final phase of eradication. As the number of infected animals and infected herds decreases, it gets more difficult to find and remove them. Persuading farmers to modify their behaviour in order to achieve disease freedom is critical. BVD eradication is particularly challenging due to the existence of persistently infected (PI) cattle which appear healthy, but continue to shed virus and cause infection in other animals. PI animals may show no clinical signs as calves, although they may have a reduced growth rate and productivity and their life-expectancy is significantly reduced. In January 2017, there were 410 known PIs remaining on 167 holdings in Scotland.

BVD: The Importance of Diagnostic Testing

Scottish Government-funded scientists (RESAS Strategic Research Programme) have helped to inform the BVD eradication policy by conducting research to understand the epidemiology, transmission and host response to the virus and provide socio-economic as well as scientific evidence on how the virus can be prevented and controlled. EPIC scientists have attended joint BVD strategy meetings with the RESAS Strategic Research Programme to help direct Scottish Government funded research supporting the eradication programme.

There are several commercially available diagnostic tests available for BVDV which are carried out at approved laboratories for the purposes of the eradication scheme: 1) testing of blood for BVDV antibodies; which is used to determine whether the virus is circulating in the herd; 2) detection of the virus in blood by a specific antibody test; and 3) RT-PCR detection of the virus in blood or a tissue tag sample, which may be used to identify PI animals.

EPIC scientists at BioSS and SRUC, have developed a novel method to analyse BVDV data using repeated antibody testing measurements within herds (in collaboration with the RESAS Strategic Research Programme WP6.1) demonstrating that it is possible to epidemiologically categorise farms by their pattern of infection, with potential to inform control strategies.

To infer the BVD status of any Scottish farm, RESAS Strategic Research Programme scientists have developed a process model incorporating the BVD Eradication Scheme’s testing protocol, the individual test characteristics and the virus epidemiology. The model computes the number of calves that must be tested to be confident, to any given degree, that infection is not present on a farm. The converse probability is the probability that infection is present on farm. The higher the probability, the more likely an undetected PI animal.

EPIC scientists at Moredun and Roslin, have further developed the RT-PCR virus detection testing approach to investigate the genetic signature of BVD in individual cattle (see sections on Phylodynamics and Biobank).

Since 2011, EPIC scientists have collaborated with SRP scientists and Scottish Government to support the BVD eradication campaign. Although EPIC’s remit is focused on the detection, prevention and control of exotic notifiable diseases, endemic diseases such as BVD (for which data are more readily available) offer unique opportunities to develop and hone new scientific approaches to inform disease control and eradication strategies. Equally, there are now new technologies, which EPIC scientists have previously only applied in an exotic disease context, which can usefully inform endemic disease control strategies.  EPIC scientists are currently analysing virus samples from positive cattle, developing disease transmission models to analyse data and utilising social science techniques to understand farmer attitudes. Through these activities, EPIC scientists help maintain the momentum of the eradication programme. EPIC’s work was presented at the January 2017 joint RESAS / EPIC Beef and Sheep Industry day where invited farmers, veterinarians, industry representatives and consultants provided valuable feedback and insight as to how they saw BVD eradication progressing over the next few years.

Evidence of established patterns of disease spread will help to shape Scottish Government policy and guidance on the eradication scheme.

Phylodynamic Modelling: Understanding disease risks: BVD is a member of the Pestivirus family and is closely related to Border Disease Virus in sheep and Classical Swine Fever in pigs (see Figure 1). The virus genome consists of single stranded RNA organised into 4 regions (5’- 3’UTR at the end, N-Pro, structural proteins and non-structural proteins). Viruses of this type have a high rate of mutation in their genetic code. EPIC scientists are exploiting this feature to model the phylodynamics of the disease to understand how its genome sequence changes over time as it moves between hosts, and uncover potential disease transmission routes at both regional and farm levels. This intelligence can then be used to inform disease surveillance programmes and enable targeted intervention strategies focused on specific transmission routes or regions where disease is difficult to eradicate. This can be seen, for example, in Figure 2; there appear to be strong, long range transmission links between places in England & Wales, and Scotland, and also a more local exchange across the border. 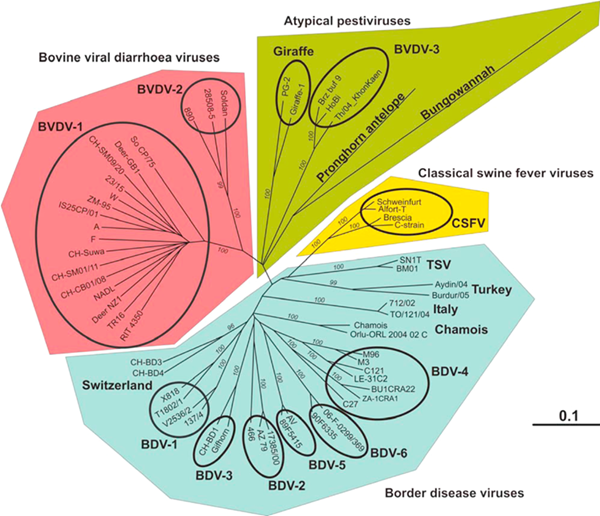 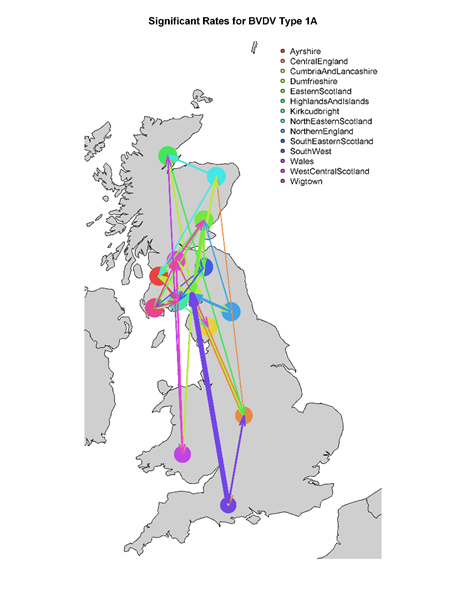 Biobank: Building a reference resource: Phylodynamic modelling is only possible if scientists have access to sequence data from relevant genetic material. Scientists used sequences of BVD virus obtained around the globe and deposited in the European Nucleotide Archive to identify potential regions of the BVD genome that mutate at a high enough rate to conduct phylogenetic analysis within the anticipated timeframe for eradication. In particular it is important to have sequences from a wide geographic area over several years.

In Scotland, EPIC scientists have worked closely with two Scottish Government approved diagnostic laboratories, Biobest Laboratories (since 2010) and SAC Consulting Veterinary Services (since 2013), to create a reference sequence repository. This repository is called the BVD Biobank and is based at the Moredun Research Institute near Edinburgh (see Russell et al. 2017 for more information).  BVD positive samples from Scottish cattle submitted through assurance schemes are sequenced. The majority of samples are received as serum, but tissue tags are now increasingly frequently submitted to testing laboratories. EPIC scientists have developed and optimised protocols to generate sequence data from the 5’UTR and N-Pro regions for analysis in the positive samples. Protocols have been optimised for direct RT-PCR from serum in order to maximise the throughput of samples and reduce costs. The sequences are uploaded to the EPIC database with their associated animal identification, location and date of sample. The Biobank is made up of 66% Scottish samples, with the remainder submitted from England and Wales. The analysis of sequence variation depicted below shows a highly diverse population of BVDV in Scotland acting as a proof of concept that this approach could be used in Scotland for tracing of chains of infection. Although the BVD Biobank will be of most value in phase 5 of the eradication programme, developing it now means a larger dataset can be generated, enabling more accurate and detailed analysis and therefore better advice.

Figure 3: BVD sub types in the biobank. Most BVD isolates in Scotland are BVDV1a. 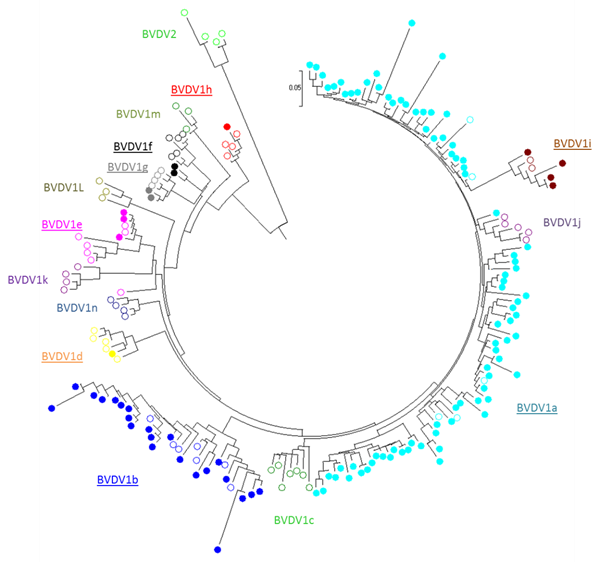 Figures 3 and 4 illustrate the proportions of different BVD subtypes in the biobank, and the relationships between isolates sequenced. The majority of samples sequenced are BVDV-Type 1a (light blue). BVDV types 1b, 1d, 1e, 1f, 1g, 1h and 1i have also been identified. BVDV-Type 2 accounts for ~50% of infections in North America. In Europe BVDV-Type 2 accounts for less than 10% of infections, but recent outbreaks suggest the serotype is an emerging threat in the region.

Social science: Understanding the role of farmer behaviour: EPIC social scientists at the James Hutton Institute are about to begin a novel ethnographic research using mobile and video techniques to understand farmers’ on-farm activities and decisions about biosecurity and compliance with BVD policy. The team are currently recruiting farmers to take part in farmwalks and/or do self-filming that is discussed afterwards with the researcher to build a picture of on-farm biosecurity and its key practical, social and cultural contingencies. The importance of biosecurity in controlling the transmission of BVD is well recognised. Introducing BVD into a herd through fomites, contact with neighbouring stock and bringing stock onto the farm are risks that good biosecurity practice can help mitigate. In conjunction with semi-structured keeper interviews the social science research on farmer behaviour can offer insights into better ways to help farmers reduce the risk of bring BVD onto their farm.

Highlighting the key biosecurity messages that are a critically important part of disease prevention and control, Battle of the Bugs focuses on Sheep Scab and BVD as examples of biosecurity in practice and its importance to farm profitability.

EPIC scientists have made significant contributions to the industry-led eradication of an endemic disease, BVD in Scotland. Phylodynamic sequence analysis has proved a potent tool in the eradication and control of exotic disease incursions in the UK including Foot-and-Mouth Disease and Avian Influenza. Applying these techniques to the Scottish BVD context has necessitated the development of a unique BVD Biobank for Scotland, created in collaboration with industry BVD scheme diagnostic providers. In collaboration with the RESAS Strategic Research Programme, EPIC scientists have conducted farm level analysis of BVD spread, providing insight into farm transmission routes. The picture provided by EPIC scientists’ analyses provides vital data to inform disease surveillance and farm level intervention during the latter stages of the eradication programme. Social science research into biosecurity and farmer behaviour for BVD will provide insights into the often neglected human element in disease control.

George Russell led the development of the BVD Biobank and sequencing of BVD positive samples. George is a molecular virologist at The Moredun Research Institute.

Sam Lycett conducted the mutation rate and phylodynamic modelling. Sam is a Chancellor’s Fellow at the Roslin Institute.

Katrina Brown led the social science research and Orla Shortall conducted the analysis. Katrina is a human geographer and Orla is an inter-disciplinary social scientist, both at the James Hutton Institute.

Julie Stirling development of the BVD Biobank database. Julie is a quantitative scientist and part of the EPIC data management team at SRUC.