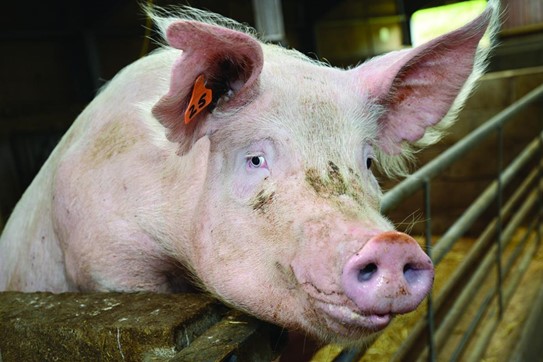 Studies led by the Roslin Institute have inspired a national campaign to help reduce the risk of spreading infectious diseases such as African swine fever (ASF).

Scientists' predictions for the potential impact of a UK outbreak of ASF - which in recent years has spread from China to Western Europe - have led to moves encouraging the cleaning of vehicles used for transporting livestock.

The #MuckFreeTruck campaign, led by the National Pig Association and the Animal Health Development Board (AHDB), could help curb the effect of infectious disease on the UK pork industry, whose exports are worth more than £400 million each year.

Researchers created computer models of the spread of ASF, using figures from two national databases of pig movements, in England and Wales and in Scotland.

Their study showed that if the disease entered key pig-producing areas, it could spread country-wide within weeks.

Producers, processors and hauliers of livestock should prevent dirty lorries from entering farms and leaving processing plants, they found.

Their research, carried out in collaboration with the Pirbright Institute and the Royal Veterinary College, has been endorsed by the UK Government's Department for Environment, Food and Rural Affairs (Defra), and by the Chief Veterinary Officers for Scotland and the UK.

Policymakers are working to limit the likely impact of the disease, which has caused outbreaks in Ukraine, Poland and Belarus and recently spread to Belgium, but has not yet reached the UK.

Symptoms of ASF are difficult to detect, and infected pigs can take more than two weeks to show signs of illness.

The research was supported by the Scottish Government through EPIC.