With permission from 'Cows eat grass don't they? project

The ‘Cows eat grass, don’t they?’ project took to the stage at the Edinburgh Fringe for a second year as part of the Cabaret of Dangerous Ideas, a public engagement initiative to connect academic research with the public. This provides an excellent opportunity to engage with people who wouldn’t normally be involved in research about the dairy industry. 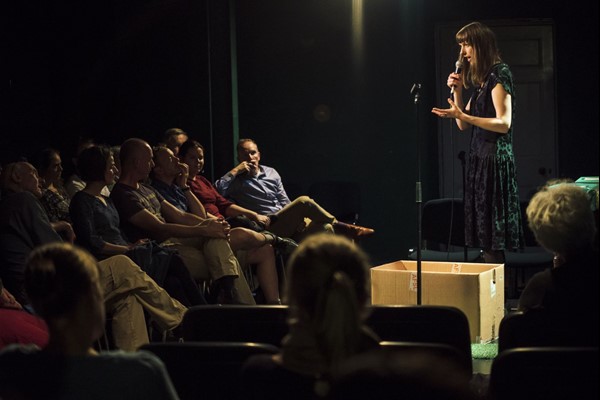 I started the event explaining that I did not have an agenda for the show: neither to convince people that indoor dairy farming is a terrible idea nor equally that they have no right to object to it. My ‘dangerous idea’ for the show was that values matter, and discussing, considering and exploring our values around how we want our food to be produced is a worthwhile endeavour. A fact is just a non-sequitur without a value motivating action on it.

The audience of around 40 were asked how many thought that cows should have access to pasture. The majority raised their hands. Two stated they thought it was okay if cows were housed all year round and 5 were undecided.

Host and comedian Susan Morrison, the long standing compere of Cabaret of Dangerous Ideas, played the role of a cow, named ‘Esmerelda’ by an imaginative member of the audience, to talk the audience through the life of a cow on an average grazing farm in the UK: what she ate, how often she was milked, when she spent time indoors or outdoors etc. 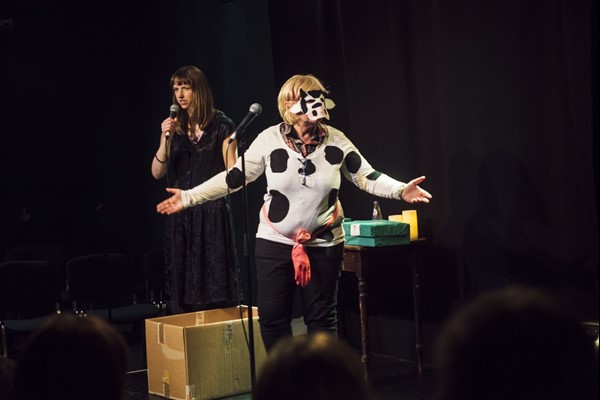 Host Susan Morrison then played the role of an indoor cow, named ‘housebound’ by a different audience member, to describe why farmers house cows all year round and some of the details of life for an indoor cow.

The session was then opened up for questions and discussion. Several questions related to the health, welfare and choices of indoor cows. Audience members wanted to know if cows choose to go outside in studies, if health outcomes are different indoors or outdoors, if antimicrobial requirements are different. One person enquired about ‘objective’ research on the matter, i.e. research which was not funded or carried out by industry interests.

Audience members also focused on the needs of farmers – the economic implications of indoor and outdoor systems and how farmers could be remunerated fairly to allow them to make long term decisions. One audience member suggested a cultural change was needed in how we regard our milk – as a highly valuable product rather than an anonymous and taken-for-granted essential.

The audience were then presented with four scenarios of how the dairy sector might develop in the coming years and asked to rank them in order of preference. This elicited different preferences – from a vegan future of no dairy farming; to a pasture based system similar to Sweden’s where cows must spend some time on pasture; to a mixed sector with pasture based and indoor milk being labelled differently at the point of sale similar to that in the Netherlands. A Danish style system of 75% indoor dairy production was not chosen as a top preference.

At the end of the event 5 audience members indicated they had changed their minds because of what they’d learned during the hour. It was a short hour in which to discuss a large topic, but it showed an appetite for discussion and reflection.