On the second day of my visit to APHA in Weybridge last month, I attended the annual APHA modelling symposium. Also present were a number of my EPIC, APHA and Scottish Government colleagues, some of whom also attended the EPIC/APHA meeting on the previous day (read more about that here). The theme of this ninth iteration of the modelling symposium was the application of global thinking in the modelling of pathogen risk and cross-border disease spread. I found this particularly relevant to my work on how animal movements have an impact upon disease risk in Scotland.

Even models for any particular disease, such as Foot and Mouth Disease (FMD), are often built on different data sets and may give differing results.

Christine Middlemiss from Defra opened the symposium, noting that much of the work on exotic disease outbreaks is bespoke to particular pathogens or geographical regions. This led to the development of multiple disease spread models, each with different strengths and weaknesses. Even models for any particular disease, such as Foot and Mouth Disease (FMD), are often built on different data sets and may give differing results. However, combining more generic disease transmission models with globally available data sets can help us to develop frameworks which are adaptable to almost any disease or geographical region.

The first session on generic models was focused on the development of generic modelling frameworks that, with only small tweaks, can easily be transferred from one disease system (or geographical region) to another. Rachel Taylor from APHA described a generic risk assessment tool they developed to compare the risk of exotic disease introduction along different pathways (such as the legal trade of animals, vector flight, wild animal movements, food importation, etc.). Changing focus from animal to plant diseases, Stephen Parnell from the University of Salford then talked about difficulties in transferring plant disease models between different geographic regions, using Xylella fastidioso affecting olive trees in Italy as a vivid example. 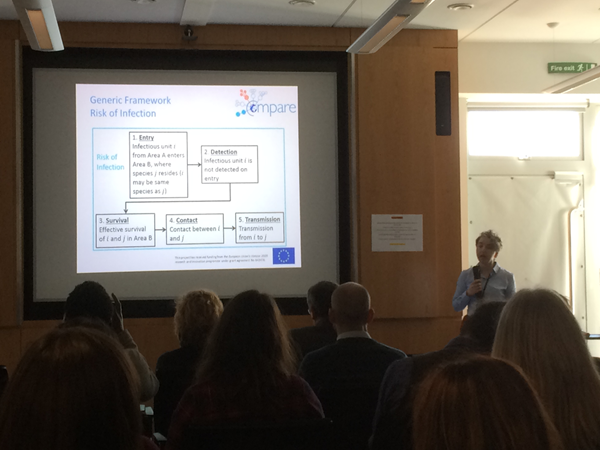 The second session on parallel models was of particular interest to me. Clazien de Vos from Wageningen University showed how seven different generic risk assessment tools agreed qualitatively, though not quantitatively, on the risk for introduction of African Swine Fever to the Netherlands and Finland. For policy decisions, getting qualitatively correct estimates is most important though: knowing whether the estimated probability of a disease reaching Scotland is 80% or 90% is arguably less important than knowing that this risk is high.

A number of posters were on display for discussion during the lunch and afternoon tea breaks, two of which were contributed by EPIC members. 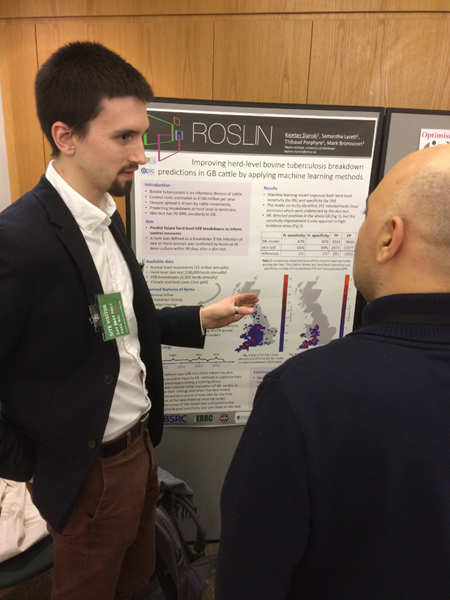 In the final session for the day, we considered how to best make use of globally available data in disease spread models. Collaboration between countries with different disease statuses—where one country has the disease, and the other has not—is useful, but leaves challenges in cases where management practices in the countries differ significantly.

William Wint from Oxford University gave an inspiring talk on pragmatic approaches for the modelling and mapping of diseases. He urged the use of standardised public domain data, and steering clear of newer, untested statistical methods when tackling policy questions; generally people and agencies have more faith in established methods.

Analysts need to be aware of biases in different data sets, which might skew the results

Robin Simons from APHA then got into the nitty-gritty of some of the issues in using freely available data sets to produce disease risk assessments. Analysts need to be aware of biases in different data sets, which might skew the results. If, for example, in a database a specific country has a blank (missing) value in the number of cases for a certain disease, does that mean they had zero disease cases? Or does it mean that they did not test any animals for the disease?

Though the development of generic disease spread models is laudable, I remain somewhat sceptical of one-size-fits-most approaches. Generic models can be of great benefit to countries which are disease-free—and therefore have no data on which to build disease spread models—but it would necessarily lead to sub-optimal performance for any specific pathogen or geographical region. There is an inherent trade-off between doing all things (i.e. for all diseases, in all countries) reasonably well, and doing some things (i.e. for a specific disease, in a particular country) exceptionally well. My personal preference is for modelling frameworks which allow us to prototype very specific and detailed disease spread models in a very short period of time, which is something we are actively working on in EPIC. I also like the ensemble model approach discussed at the symposium, which combines the outputs from different models. In the field of Statistics, at least, ensemble modelling has been shown to generally outperform individual models. It is also the approach used in modern weather forecasting, which is why our weather forecasts are now (usually!) considerably better than a couple of decades ago.