EPIC at the Royal Highland Show 2019

EPIC scientists were on hand in the Scottish Agricultural Organisation Society (SAOS) building at the 2019 Royal Highland Show to explain their research into global disease threats to the Scottish livestock industry. 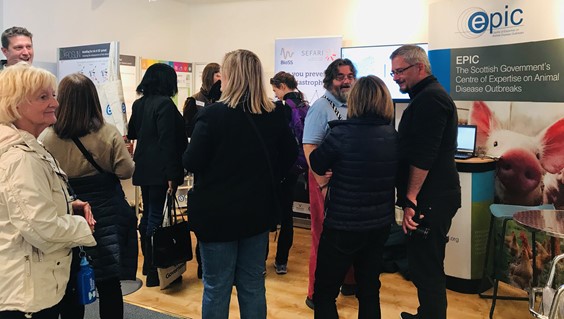 The key areas were preventing disease outbreaks with a special focus on the National Pig Association's (NPA) Muck Free Truck (#MuckFreeTruck) campaign, and controlling disease outbreaks when they do occur, specifically looking at BVD and Avian Influenza. We welcomed a wide range of visitors including farmers, industry experts, research scientists and Scottish Government.

BioSS’s Cowtastrophy app allowed visitors to the stand to take on the role of Chief Veterinary Officer of an imaginary island facing an epidemic in their cattle population. Visitors applied different control methods to the island’s cattle industry to halt the spread of disease as quickly as possible, aiming to control the disease with minimal infected cattle and minimum cost to the island’s economy. Cowtastrophy highlights the importance of early implementation of control strategies including movement restrictions during an epidemic, and the importance of vaccination where available.

Our ‘Disease Risks to Scottish Livestock: What’s on the radar?’ event in the Scottish Government pavilion on Thursday the 20th of June provided an opportunity for industry professionals, scientists, vets and farmers to discuss global disease threats to Scotland’s livestock industry. With speakers from EPIC, SRUC, APHA and the Scottish Government, the event looked at how we prepare for potential disease outbreaks and how the research being conducted by EPIC scientists is applied to the industry. The current global outbreak of African Swine Fever was discussed, and information about this was also available on the EPIC stand. 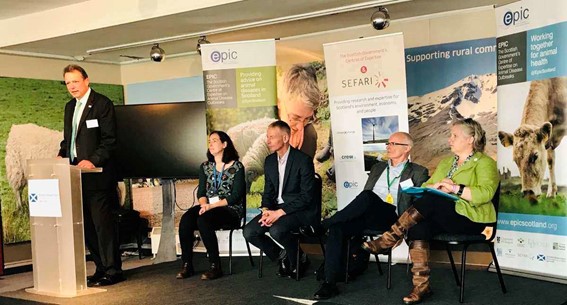 Challenges to BVD Eradication in Scotland