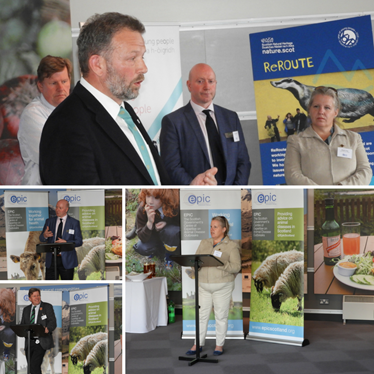 Attendees were invited to find out why industry continues to drive forward the BVD eradication programme in Scotland and how data underpin the scientific evidence supporting development of BVD policy. The event brought together EPIC (Centre of Expertise on Animal Disease Outbreaks), ScotEID, NFUS and Scottish Government’s Animal Health and Welfare Division.

Representing the Dairy Industry, Gary Mitchell shared his personal experience as a young farmer of having BVD on his dairy farm. Gary Mitchell highlighted the importance of knowing the BVD herd status of neighbouring farms.

It is extremely important to eradicate PIs

Bob Yuill highlighted the importance and potential of ScotEID as a multi-species data system. “It is much more than a database” he said. Bob Yuill expanded on the role of his staff in providing expert impartial advice on BVD to farmers, vets, abattoirs and marts via the ScotEID BVD helpline as well as taking a proactive approach by contacting farmers directly when issues arise.

Our BVD helpline takes around 10,000 calls a year and there are no short phone calls about BVD

Covering RESAS funded research by both the Strategic Research Programme and EPIC, Dominic Mellor stressed the importance of evidence-based policy. Dominic Mellor highlighted the breadth and depth BVD research taking place across Scotland as part of the RESAS research portfolio including farmer attitudes to biosecurity, BVD BioBank and economic impacts of BVD.

Sharing the findings from the Scottish Government consultation on Stage 5 of the BVD eradication programme, Sheila Voas described how the new rules and tightening of existing regulation would continue to drive down the numbers of PIs. Sheila Voas praised the role of the BVD Advisory group, noting that the role of policy was to help realise industry’s vision for a BVD free Scotland through facilitating regulatory change.

We all agree BVD is an expensive disease to live with

Following an opportunity to ask the panel of speakers questions, attendees continued discussions in an informal ‘meet the scientists, policy-makers and industry representatives’ session. The chance to exchange views and ideas on how to best achieve a BVD Free Scotland resulted in many new contacts and inspiration to continue to support the eradication programme.